Patrick Flynn is a Government Affairs Specialist for Independence Blue Cross. In this role, he is part of a team that communicates the company’s public policy positions to elected officials and regulators at the federal, state and local levels. This includes Independence’s key priorities to address the ongoing opioid epidemic.

Since 2014, Patrick has been in recovery from opioid addiction. He strives to help others looking to live a new way of life and do his part to break the stigma of addiction, especially in the workplace.

A native of Scranton, Patrick is the son of Catherine and the late Matthew Flynn. He has a sister Maura and a brother Matthew. Patrick has two nieces, Cate and Annie, who he completely adores.

Breaking the Stigma of Addiction: An Independence Associate Shares His Story of Recovery 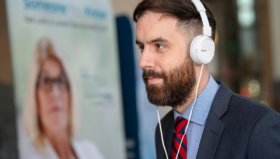 Patrick Flynn listening to the personal story of someone affected by the opioid crisis at a Someone You Know kiosk In 2018, the Independence Blue Cross Foundation launched Someone You Know, a national campaign to reduce the stigma associated with opioid use disorder. The campaign shares the personal stories of those affected by the opioid crisis....
Read More