IBC Foundation president recognized for her leadership, philanthropy, and volunteerism

The Gala supports Girls Today, Leaders Tomorrow — the Women’s Initiative’s signature program that empowers girls in grades 7 through 12 from underserved communities, helping them embrace their leadership potential while developing heightened awareness of educational and career opportunities. Since its inception in 2003, the Women’s Initiative has raised over $3 million in support of this program and others that improve the lives of underserved women and girls.

Now in its second decade, the Women’s Initiative is a leadership network committed to philanthropy and volunteerism. Its members aim to support United Way’s mission by encouraging women to recognize their philanthropic power and engage in service projects that strengthen programs for underserved women and girls.

“I’m honored to be recognized by an organization that I so greatly admire and that has done so much to help young women find and pursue their life’s ambitions,” said Marshall-Blake. “There’s nothing more rewarding that seeing a young person recognize their potential and look beyond any of their perceived limitations to achieve their goals. Girls Today, Leaders Tomorrow helps girls at a crucial time in their lives and through mentors, role models, and innovative programs, sets them on a path of great self-discovery.”

Marshall-Blake’s commitment to service is exemplified throughout her professional and personal life. She has been honored for her leadership and community service by numerous organizations such as the NAACP, Girl Scouts of Eastern PA, Philadelphia Tribune, League of Women Voters, Philadelphia Business Journal, Living Beyond Breast Cancer, and the United Way of Greater Philadelphia and Southern New Jersey. She also serves as a spokesperson for the local chapter of the American Heart Association. In addition, Marshall-Blake serves on 25 non-profit boards and committees, sharing her expertise and network.

Among the prestigious organizations that she volunteers with are the United Way Women’s Initiative, Pennsylvania Conference for Women, Philadelphia Leadership Foundation, Urban Affairs Coalition, Women’s Leadership Forum, and the Urban League of Philadelphia. Since 2011 she has served as President of the Alpha Kappa Alpha Sorority, Inc.

The Independence Blue Cross Foundation is a charitable, private foundation, whose mission is leading solutions for a healthier community. The Foundation targets the following areas of impact: Strengthening the Blue Safety Net, Bolstering the Health Care Workforce, Addressing Health Priorities, and Community Innovation. 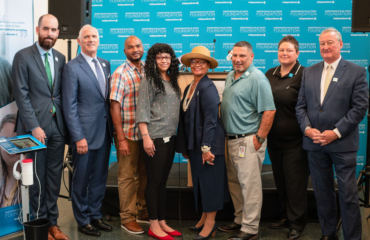